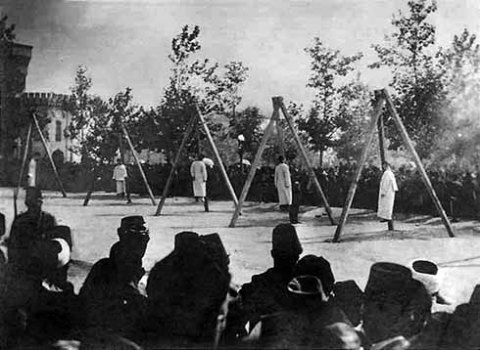 A picture released by the Armenian Genocide Museum-Institute purportedly shows Armenians hung by Ottoman forces in Constantinople in June 1915. Armenians say up to 1.5 million of their forebears were killed in a 1915-16 genocide by Turkey’s former Ottoman Empire. Turkey says 500,000 died and ascribes the toll to fighting and starvation during World War I. AFP PHOTO / ARMENIAN GENOCIDE MUSEUM INSTITUTE (Photo by STR / AGMI / AFP)

The CUP brought the Ottoman Empire into the First World War on the side of Germany and the axis powers against France, Britain and Russia.

Russia had long coveted territory in Anatolia – with the Ottomans doing likewise in the Caucasus – and reached out to Armenians in eastern Anatolia, arguing that as fellow Christians they would fare better under Russian rule. Some Armenians reciprocated and defected to join the Russian ranks.

Increasingly, the CUP and local governors began to view Armenians as a fifth column who posed an existential threat to their rule.

Though massacres of Armenians in Anatolia had already taken place for months before, historians generally recognise 23–24 April 1915 as the beginning of the genocide.

Talaat Pasha, one of the «three Pashas» that made up the leadership of the CUP, ordered the mass arrest of hundreds of Armenian intellectuals, community leaders, religious figures and politicians, most of whom would be tortured and killed. He then ordered the closure of all Armenian organisations in the country.

On 26 May 1915, Talaat’s «Deportation Law» was approved by the government, allowing for the deportation of the Armenians of eastern Anatolia to an undisclosed location away from the frontlines with Russia.

Following this, Armenians across Anatolia were either slaughtered or deported en masse to the Syrian desert in long marches by foot where the chances of survival were minimal. Tens of thousands were left to die on the roadsides after being denied food and water or contracting disease.

Numerous witnesses have over the years testified to the violence that was meted out against the Armenians across Anatolia by paramilitary groups, the army, police and armed gangs.

«From the first days of our journey, we met many groups of Armenians. The Turkish armed guards and gendarmes drove them (on foot) towards death and perdition. First, it made us very surprised, but little by little we got used to it and we even did not look at them, and indeed it was hard to look at them,» wrote Mohammad-Ali Jamalzadeh, an Iranian writer, in 1915.

«By the hit of lashes and weapons, they drove forward hundreds of weeping weak and on foot Armenian women and men with their children. Young men weren’t seen among the people, because all the young men were sent to the battlefields or were killed for precaution.»

Eitan Belkind, a British spy and member of the Ottoman army, recounted a particularly gruesome incident at the hands of Ottoman soldiers.

«After a three-day ride I reached the heart of Mesopotamia where I was a witness to a terrible tragedy… the Circassian soldiers ordered the Armenians to gather thorns and thistles and to pile them into a tall pyramid… afterwards they tied all of the Armenians who were there, almost five thousand souls, hand to hand, encircled them like a ring around the pile of thistles and thorns and set it afire in a blaze which rose up to heaven together with the screams of the wretched people who were burned to death by the fire… Two days later I returned to this place and saw the charred bodies of thousands of human beings,» he wrote.

Though it is hard to confirm an exact figure, the Encyclopedia Britannica estimated there were around 1,750,000 Armenians in the Ottoman Empire prior to 1915.

Today, the population of Armenians in Turkey is thought to be around 70,000.

[excerpt from: The Armenian genocide explained, from middleeasteye.net  (Read the rest of the story)

You are currently reading [The Armenian genocide 1915-1917 · at αγριμολογος.